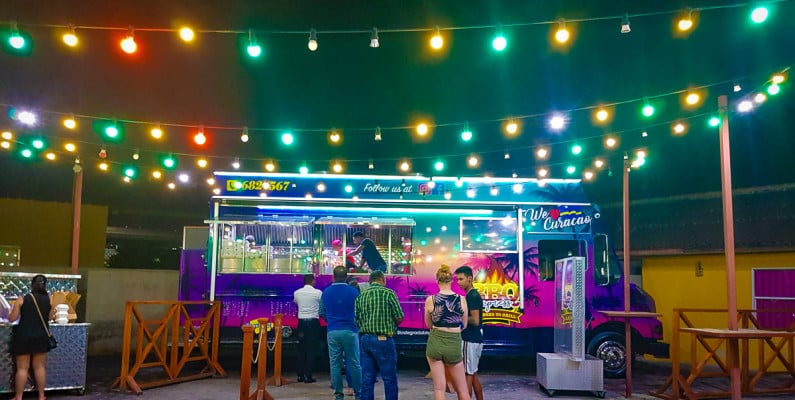 1. Eating ‘bolo’ at a party comes as last

So, first of all, the word ‘bolo’ means cake, and cake on Curaçao immediately refers to a party! While in most countries you start the party by singing ‘Happy birthday’ and eating cake this is actually the last thing you do at a birthday party on Curaçao. If you don’t then your party will last no longer than half an hour. Here’s why: The people of Curaçao have a sweet tooth by nature. They really loooove cake, cupcakes or everything else that is sweet. You know the saying ‘save the best for last’. Well… that’s exactly what they do! They save the cake for last. It is custom on Curaçao that after you’ve celebrated a birthday party and you’ve spoiled yourself with all the drinks and bites that were served, you than jump to the best part: ‘kanta bolo’ which literally means ‘singing the cake’ but what is actually meant is that everybody needs to gather around the cake and sing happy birthday to the birthday boy or girl. After that, the cake is sliced up and you see everybody lining up to get their piece of the pie (literally), which is wrapped in foil and not eaten right away! Believe it or not, but after that part, everybody goes home practically immediately.

2. Singing happy birthday in 4 languages, who cares if you speak them or not

If you think that singing happy birthday and eating cake comes as last is weird, then you will definitely find it peculiar that everybody sings happy birthday in 4 languages, yes 4! Namely: Papiamentu, which is the local language of Curaçao, Spanish, English, and Dutch! Why? We don’t know for sure but most certainly because of the fact that Curaçao is actually a melting pot of more than 50 different cultures! The majority of the population of 150,000 Curaçaoans have an Afro-Caribbean background. As a by-product of a history of the slave trade, the island has a rich cultural heritage that is embraced by both residents and visitors. And there you have it: almost every birthday party on Curaçao is – just like the population of Curaçao – a potpourri of different cultures and backgrounds. Of course, nobody wants their neighbor to feel left out so they just sing in all the ‘main’ languages that are spoken on the party! One thing we know for sure is that there is no possibility that the birthday boy or girl, in particular, does not feel festive!

3. Smell a bottle of 'Glacial' at a funeral

Unfortunately, it is not always party and happiness on Curaçao. Sometimes it happens that a funeral or cremation is held. And of course, with all the emotions that are expressed on such a day, it can get a little too much for someone and it sometimes happens that that person faints. That person is taken care of immediately by family or friends. But how? That’s a different story: one of the most appreciated – and locally produced products on Curaçao is Alcolado Glacial. It is a mentholated splash lotion and it’s used by the locals almost daily, if not daily. It’s considered a must-have product since it is used for all sorts of things such as headache, muscle pain, to cool down when it’s hot, stomach ache and when somebody has fainted! They hold the bottle under the nose and that person immediately comes back to earth. The funeral or cremation continues as if nothing happened.

4. Saying ‘bon siman’ at the beginning of the week

The people of Curaçao are very optimistic people. On Sunday they already start saying ‘bon siman’ to each other, which means ‘have a good week’. This continues until Monday at the end of the day. On Friday they also wish each other a 'bon wikent’ (good weekend), just like the rest of the world.

But, considering the fact that Monday is the hardest day of the week, this type of positivity actually deserves some credits! It might give you the strength to open your probably exploded email inbox. However, when you’re in the Caribbean, perhaps the sun, the paradisiac environment and the Caribbean vibe that prevails on the island ensure that no workday feels like a workday!

5. Playing domino and drinking beers at a 'snèk'

So, after a whole week of hard work, it’s time for some relaxation. Most people that visit a Caribbean island such as Curaçao, relax by laying on the beach getting a tan. However, the locals open their weekend by organizing a nice get-together. The funny part is that this get-together normally does not take place at their homes, but more often at a ‘snèk’. Unfortunately, there is no English word that covers the actual concept of the word snèk, but we’ll try to explain: a local snèk is sort of a mini supermarket in combination with an open-air pub. They are open all day and sell a beer for (almost) the same price as in a supermarket. It’s a cheap night out. Snèks are also very handy if you want to do some quick shopping after the supermarket has closed. However, the ultimate celebration of the day or weekend is held at a snèk while playing domino with a bunch of friends and a very very cold beer in your hand!

6. Building your own stand prior to the carnival

Carnival is by far the most popular cultural festivity on Curaçao. The preparations for this event start months in advance. First of all, the participating carnival groups are eagerly looking for a ‘theme’ which will serve as the basis for the look and feel of their costumes. After that part, the costume revelation of each group takes place. There is a lot of competition among the groups which serves as fuel for creativity! Once that part is over, the king/queen of ‘tumba’ needs to be chosen. Tumba is the local carnival music and very popular among the local people. The ‘tumba festival’ lasts a week and is broadcasted live on television. If you want to read more in detail information about carnival, you can read it here.

Almost at the same time that the tumba festival is going on, the locals are busy building their own carnival stand on the side of the road where the grand parade is taking place. Yes, the people on Curaçao build their own stand, and they are good at it! This part lasts for weeks. A couple of days prior to the grand parade there is no empty spot left on the side of the road of the carnival route. The stands built by the locals come in all shapes, sizes, and colors. They eat, drink and party along with the carnival groups over there. It is truly a happening. If you ever have the change to come and visit Curaçao, you should definitely do so during carnival. You won’t regret it!

Curaçao people love food, but one of the food habits that stand out the most is eating ‘trùk'i pan’ which is short for ‘trùk di pan’, translated to sandwich truck. When night time hits, the late-night dining and street food scene on Curaçao is dominated by these sandwich trucks. They used to sell only sandwiches in different varieties; with meat, chicken or fish, but pretty soon, fries were added to the menu. If you want to eat a trùk'i pan’ just like the locals do, then here’s how it works:

1. Order your food through the window of the truck and wait for your ‘number’.

2. Once your number is called, you can take your food and customize your order with a sauce of your choice. Make sure you add ‘hopi sauce’ which means a lot of sauce. Curaçao people love the sauce!

3. You can squeeze yourself into a small area in front of the truck and take a seat or do as the locals do and eat your food from the hood of your car.

Every Curaçaoean has their favorite trùk'i pan to go to. You can find them on the side of the road or at a parking lot. The food is delicious, and the prices are excellent!