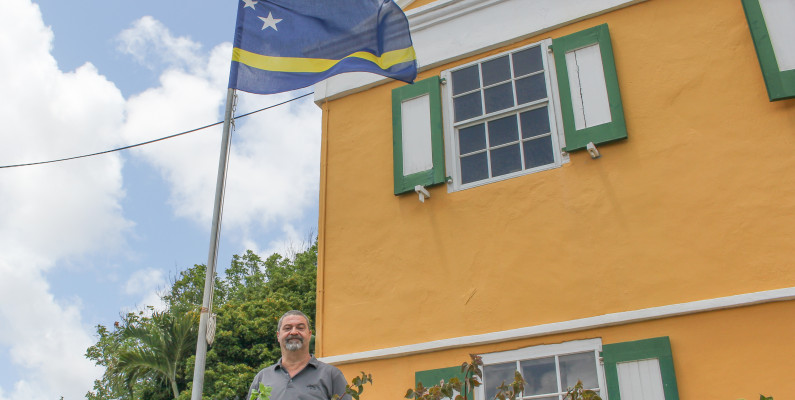 The History of the Curaçao Flag

As Flag day is on July 2nd, we would like for you to discover the history of the Curaçao flag, the meaning behind it and how the whole design came about. In order to gain more insight into the above-mentioned, we sat down with Martin den Dulk, the designer of the Curacao flag. The process of creation, how the whole project came to life and how he experienced it all, are some topics we are going to inform you in this article The History of The Curaçao Flag.

How It All Started

After 1979, the then Deputy Winston Laurens, launched a contest in order to design a flag for the island of Curaçao.  The reason behind this was that in 1977 Aruba obtained the approval by Holland to gain its status apart (autonomy as a country of the Dutch Kingdom), so Aruba announced they were going to design their own flag as preparation for when this would become official in 1984.

Hereafter, the government of Curaçao announced they wanted to launch their own flag as well. Until then, Curaçao only had the flag of the Netherlands Antilles. This was the catalyst to initiate the contest for the design of the flag in the year 1979 and in 1982 the designs were handed in, according to Martin. All citizens of Curaçao could partake in this contest.

The government put together a committee to settle on ten finalists out of all the participants, who then could go to the next round of selection. This top ten had to present themselves in front of the committee with their designs. An interesting part of this process was that they came up with a system to avoid favoritism, where the contestants had to submit their designs under an alias. An envelope with their fake names and credentials were kept in a safety deposit at the Central Bank. Only when the whole process was concluded, could they pick up these envelopes at the Central Bank, in order to know who the participants really were.

After the ten finalists were revealed, they were summoned to present and defend their design. This took place in a somewhat secretive setting and location. The finalists were judged on their creation and each one received a grade in between one and ten, just like in school. Martin scored a….one! Curiously, he was the only person who scored as low as that!

The next step in this process was that the designs had to be submitted to the insular government, which also had to happen behind closed doors, with the necessary protocols.

After the whole process, Martin went about to ask how it was possible that he got elected anyway, despite the fact that he scored so poorly. It was then that he found out that when all the designs were submitted to the insular government, they had questioned why Martin had been given the lowest score. They actually thought Martin’s design was the best. The government then decided they were going to vote after the committee was called upon to give thorough explanations of their choices.

Ultimately,  they decided unanimously to go with his design and this was publicly announced during the year of 1983.

Hereafter, the whole practice to get everything organized to raise the flag took about a year. On July 2nd, 1984, the Curaçao flag went up for the first time. “So actually looking back, I designed the flag in 1981, the process started in ’79 and if I’m not mistaken, the government launched the contest in 1980 and there was a one-year timeframe to hand in your design”, Martin recalled. And he continued...”As a matter of fact, I’ve handed in my design on the very last day of the deadline. I actually did not have any intention whatsoever to participate. My father encouraged and pushed me, by saying that I always have very nice ideas, that I’m creative and questioning why I would not give it a shot and participate. And so it came about.”

Martin was nineteen years old when he designed the flag. The participants had to adhere to a set of criteria and symbolism. “ So I stopped and thought about what I could make use of in my surroundings…what are the things I can incorporate that represent my country? So I decided to go for the sky, the sea, and the sun. I started to play around with colors and it finally boiled down to the blue and yellow. Afterwards, I decided to add a star to it. I felt like something was missing and I recalled having learned in school that the territory of Curaçao consists of two territories. Curaçao and Klein Curaçao, hence the two stars; the big one representing Curaçao and the small one representing Klein Curaçao. I initially made it an “eight-point” star, but then I thought; our nation is formed by five continents, and so it came about that it turned into a five-point star.  I’ve introduced the white color to represent peace.”

And at that time, did you have painting as a hobby or were you working on an art career? – “At all”

Martin used to designed back then a little bit. He had a computer at that time. “I was pretty revolutionary for my time. Back then I had an Apple 2, sixty-four KB memory. But I did not use my computer for the design work of the flag. It was just hand-drawn. My parents used to have a restaurant and I more often than not did some small projects on my computer.  I was also attending school, so I did not have much time to dedicate to design projects/work so to speak.”

How lengthy was the design process?- “I always liked history geography, since I was young. So that played a big part in the ease of designing the flag and inspiration. Back then I used to know and still do, a lot of the history of Curaçao. So I think, this was the basis for my design process.”

“In terms of how much time I literally put in? I think about less than four hours.” As I did not have the intention to participate and did so last minute anyway, I got out of school, got home, worked on the design and handed in at about 6:30 pm. And the deadline in terms of time was 7:00 pm. I recall mister Pacheco Domacasse working at Kas di Kultura (Foundation for cultural activities and information) at that time…he didn’t know me, so when I arrived, he told me: You know young man, I was about to go turn the lights off and close off the office and go home. So you  got here just in time…you’re really the last person to hand his work in. So that was of course also a funny anecdote.

Furthermore, we had to put in writing exactly what the colors and symbolism meant. The meeting where we had to defend our design lasted about ten minutes. Everything I had to explain was already set in the document. The defense of the design was  more for them to get the feeling if the work was legitimately done by the person.”

After All These Years

Does the fact that you’re the designer of our flag still have an effect on your life due date? Do you feel your work is still cherished and appreciated? –“Yes, for sure.”

Martin went on to explain that he finds that there will always be people who oppose when you’re involved in a big and significant project like this. There are people that say the design is ugly or that it doesn’t have anything to do with Curaçao. Martin recalled his name not even being mentioned that often in the beginning. On July 2nd, the day the flag was raised, they only mentioned his name in the very end. But on the other hand, it is very satisfactory to have done such work for my country and personally I was very happy with how my design turned out to be.

“It hasn’t changed my life in a drastic way. Nevertheless, whenever I see the flag hanging it gives me a beautiful feeling. Every 2nd of July I get emotional when the raise the flag on Brionplein. I can’t really describe the feeling. I certainly am very proud of it.”

Martin is a member of VKC for 20 years now. VKC is a para-military organization run by volunteers. He had the honor to be asked, on the day the flag celebrated its thirty years, to be the “Flag Commander”, meaning Martin was able to raise his own flag, fully dressed in a white uniform.

Get to know more about Curaçao