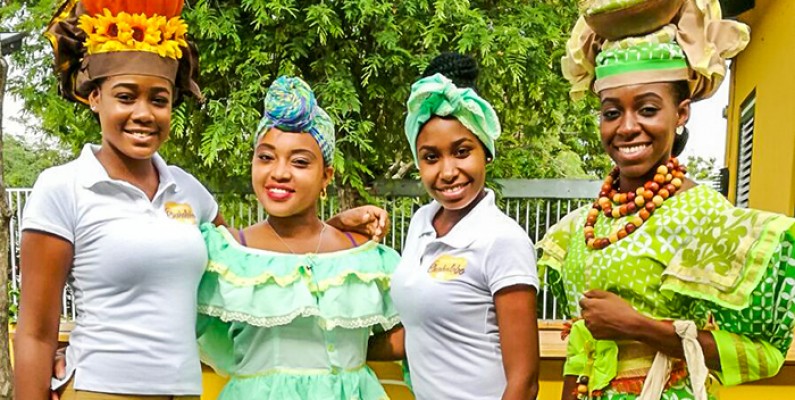 The Story Behind the Traditional Clothing of Curaçao

It’s a beautiful thing when the culture of a country is so rich and deep-rooted in the community that it survives modern times. Although there is not much documented history available of the traditional clothing of Curaçao, we sat down with Cenaida van Dinter, who has an extensive knowledge on this subject, to find out more about the story behind the traditional clothing of Curaçao.

The traditional clothing of Curaçao started after the slavery times with our ancestors. The elderly used to dress in a very modest way. They would wear a long skirt, called ‘saya', with sometimes even a pant underneath it. For the upper part, they wore a button-up shirt with a flare on the lower part of the shirt. This is called a ‘djèki’ in the local language. The ‘saya ku djèki’ is often made with the same fabric or is a combination of two or three patterns. Most women sew their own clothing and even now all the traditional clothing are often made by elderly women.

On their head, they would wear different designs of headwraps. The headwrap styles came from the African continent as most slaves were also brought from this region. They brought part of their custom to the island which prevailed over years.

The headwrap was a sign of modesty, but also to protect their hair against the sun. Several headwraps were designed, each for a specific occasion. The ‘Punta di Skálo’ was a design that was primarily used for labor. It had a knot in the back which gave the needed support to place a bucket on top of their heads.  This was necessary because women used to go door to door to sell fish and vegetables. On the other hand, ‘Pèchi Yaya’—a popular design style—was used for special occasions like baptisms or first communions. Nowadays, this style is often worn by queens during cultural festivities.

The gentlemen always had a pretty simple design. They wore cream colored pants with a loose shirt or a button-up shirt of a similar shade. The clothing was made from sugar and flour packaging. In the past, sugar, and flour used to come in big sacks. The resourceful minds of the locals took these sacks and created clothing with it. Nowadays, they use different types of textile that are more colorful and with patterns.

To protect them from the sun or to just add an extra touch to their formal wear, men used to wear straw hats on their heads. The ones they wore to work on the ‘kunuku’ (plantation) had damaged edges and were less finely braided. These hats—that were used for working—were hand braided in Curaçao, but the ones that were used when an occasion required the best outfit were often from Cuba.

Every April, we celebrate the ‘Seú’ harvest parade. This harvest parade comes from the time of slavery and signifies the belief that people are connected to mother nature. The parade is a recreation of the times when workers danced and sang their way to the storage house with their harvest. During the parade, you can marvel at different colorful clothing designs and headwraps. The designs reflect both the modernization as the creativity of the community. After Carnival, the Seú parade is one of the biggest cultural events on the island and it is a must-see if you are in Curaçao in April.